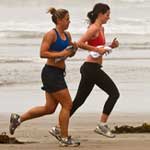 Aerobic literally means “relating to, involving, or requiring free oxygen”, and refers to the use of oxygen to adequately meet energy demands during exercise via aerobic metabolism.

Generally, light-to-moderate intensity activities that are sufficiently supported by aerobic metabolism can be performed for extended periods of time.

When practiced in this way, examples of cardiovascular/aerobic exercise are medium to long distance running/jogging, swimming, cycling, and walking, according to the first extensive research on aerobic exercise, conducted in the 1960s on over 5,000 U.S. Air Force personnel by Dr. Kenneth H. Cooper.

Aerobic exercise has long been a popular approach to achieving weight loss and physical fitness, often taking a commercial form:

– In the 1980s Richard Simmons hosted an aerobic exercise show on television, and also released a series of exercise videos