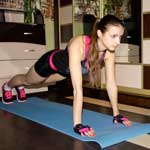 Exercising to improve our cardiovascular strength may protect us from cognitive impairment as we age.

This is revealed in a new study by researchers at the University of Montreal and its affiliated Institut universitaire de gératrie de Montréal Research Centre.

Our body’s arteries stiffen with age, and the vessel hardening is believed to begin in the aorta, the main vessel coming out of the heart, before reaching the brain.

Indeed, the hardening may contribute to cognitive changes that occur during a similar time frame.

Claudine Gauthier, first author of the study says “We found that older adults whose aortas were in a better condition and who had greater aerobic fitness performed better on a cognitive test. We therefore think that the preservation of vessel elasticity may be one of the mechanisms that enables exercise to slow cognitive aging.”

The link between fitness and brain function may be mediated through preserved cerebrovascular reactivity in periventricular watershed areas that are also associated with cardiorespiratory fitness.

Although the impact of fitness on cerebral vasculature may however involve other, more complex mechanisms, overall these results support the hypothesis that lifestyle helps maintain the elasticity of arteries, thereby preventing downstream cerebrovascular damage and resulting in preserved cognitive abilities in later life.